Nearly one in four Americans suffer from some level of gum deterioration, ranging from gum line recession to gingivitis to periodontitis. The effects begin with soreness of the gums and minor bleeding but ultimately can lead to dangerous infections, tooth loss, and a general decline in overall health and wellness.

Clearly, periodontal disease should be taken seriously and treated promptly. In the past, scaling and root planing and gum flap surgery were the only major treatment methods. But today, laser periodontal surgery is gaining acceptance as a beneficial alternative.

When performed by an experienced periodontist, laser periodontal therapy has many benefits and advantages over other treatment methods. Here are the main points in its favor: 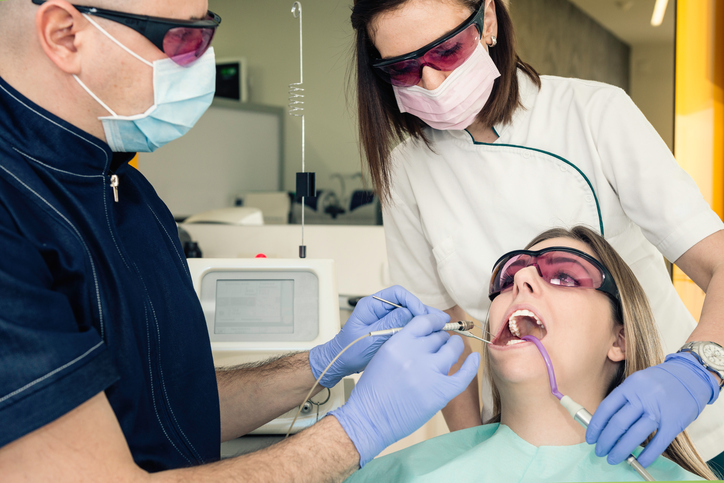 Lasers are simply more precise than manual instruments and are capable of targeting infected areas of your gums with little affect on surrounding tissues. It is a less invasive surgery that requires less cutting and results in less loss of periodontal tissue.

Not only is there less bleeding in laser periodontal surgery, but the laser immediately cauterizes areas where infected gum tissue has just been removed or vaporized. This means what little bleeding could occur will stop almost immediately.

3. The Laser Is Highly “Flexible”

In most cases, your gums will heal much faster following laser surgery than after more traditional methods of treating gum disease. While there may be a little soreness temporarily, it will soon pass, and your mouth will be “back to normal” again.

The cost of laser-assisted periodontal surgery is often the same or less than that of non-laser techniques. While the equipment is more expensive, less medication is needed and fewer trips to the dentist’s office. And your dental insurance will likely cover laser therapy as fully as alternative procedures.

6. Laser Therapy Can Assist in Scaling and Planing

Even if the condition of your teeth and gums requires some use of traditional scaling and root planing, lasers can also be used. As an adjunct method, laser therapy can make the process smoother and the results more effective.

7. Cavities Can Be Removed at the Same Time

If you have cavities that need to be removed besides periodontal problems, your periodontist can use the same laser for both purposes. The laser will very precisely cut away the damaged tooth material, and less of your natural tooth will be lost in the process. As gum disease often leads to tooth decay, many patients suffer from both — why not correct both problems at the same time?

While there is still a place for older methods of treating periodontal disease, modern laser-based surgery usually can do a better job, causing less pain, and at no greater expense. Laser periodontal surgery has many benefits and works well on all forms of gum disease.

To learn more about laser periodontal surgery or to schedule a dental appointment in the Orlando Area, contact Dr. Jeffrey J. Sevor at either his Winter Park or Winter Springs location.